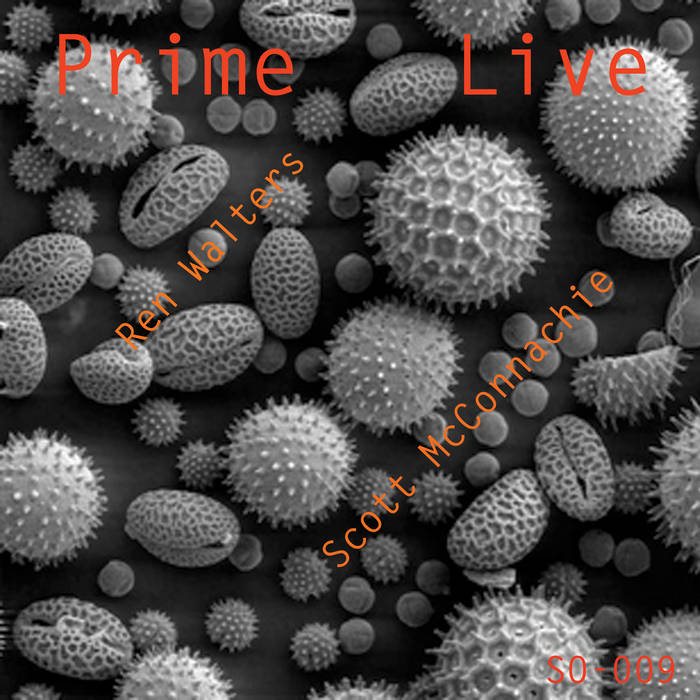 This collection of Live recordings of Prime [Ren Walters & Scott McConnachie] includes a set from 2018 SoundOut festival in Canberra and a set from the Make it Up Club's (in Melbourne) 20th Anniversary 2018. These sets show a masterful delicacy juxtaposed with the brilliant blistering passion that Prime brings to their performances, that needs to be heard on the world stage.

Ren has spent much of the past five decades focusing his creative practice on music performance whilst still maintaining a vital visual art practice that includes physical performance. Since the mid 1990’s he has been teaching approaches to improvisational music, sound-making and performance in Melbourne. He holds a Diploma of Fine Art from the Phillip Institute in Melbourne, and an MFA (Contemporary Music) at the VCA-MCM. In 2019, he is finalising a PhD on Improvisational performance practice at VCA-MCM. He co-founded the long-running Melbourne Improvised music night in 1998, the Make It Up club. Won APRA Composers Commission award in 2009. Produced over 100 CD recordings (sixty CD titles held by Melbourne Polytechnic library, 2010). In 2011, established General Assembly of Interested Parties to present performance events. www.gaipsite.com . Established bi-annual performance event ‘Current’ (improvisational performance) in 2012. currentmusic-event.com. Appointed Honorary Fellow at VCA and MCM University of Melbourne, 2013. Inaugural artist-in-residence at Museum of Innocence Mildura, 2016.

Scott is regarded as one of Australia’s most exciting improvising saxophonists. Drawing from traditions including jazz, freely improvised music and western art music, his sound is remarkably personal and is coupled with an extremely high level of performance intensity. Since relocating from Brisbane to Melbourne in 2011, Scott has performed with leading Australian improvisers such as David Tolley, Alan Browne, Scott Tinkler, Ken Edie, Simon Barker, Erkki Veltheim and Phil Treloar. He performs regularly with The Australian Art Orchestra, the Paul Grabowsky sextet, and has performed with Barney McCall’s ASIO (Australian Symbiotic Improvisers Orbit). In 2012 PRIME, McConnachie’s duo with legendary improviser Ren Walters, released the album “Motive”, an exploratory work for saxophone and guitar. McConnachie also recently released a live recording of solo saxophone music titled “Getting out of the Way”. As a classical saxophonist, Scott has given concerts performing the works of Xenakis, Berio, Bach, Wuorinen and others. In 2015 McConnachie toured remote indigenous communities in the Northern Territory with the highly acclaimed Black Arm Band. In 2009 Scott toured extensively in Japan with legendary free jazz drummer Shoji Hano, and he has toured Australia numerous times since 2005 with collaborative projects Water Logic, Taste of Teeth, and singer songwriter Jackie Marshall. From 2005 - 2011, McConnachie was a key figure in Brisbane’s improvised music scene, and a founding member of community performance series and yearly festival, Audiopollen. During this period Audiopollen hosted many international artists including Tony Buck, Shoji Hano, Jeff Henderson and John Butcher. McConnachie has performed at numerous festivals including the Melbourne International Jazz Festival, Stonnington Jazz Festival, Woodford Folk Festival and The Now Now Improvised Music Festival in Sydney.

Recorded by Kimmo Vennenon at the SoundOut festival 2018, Canberra & at the Make It Up club in Melbourne by Prime.

Copyright remains with the Artists and SoundOut and all funds go directly to the Artists when you purchase this album.