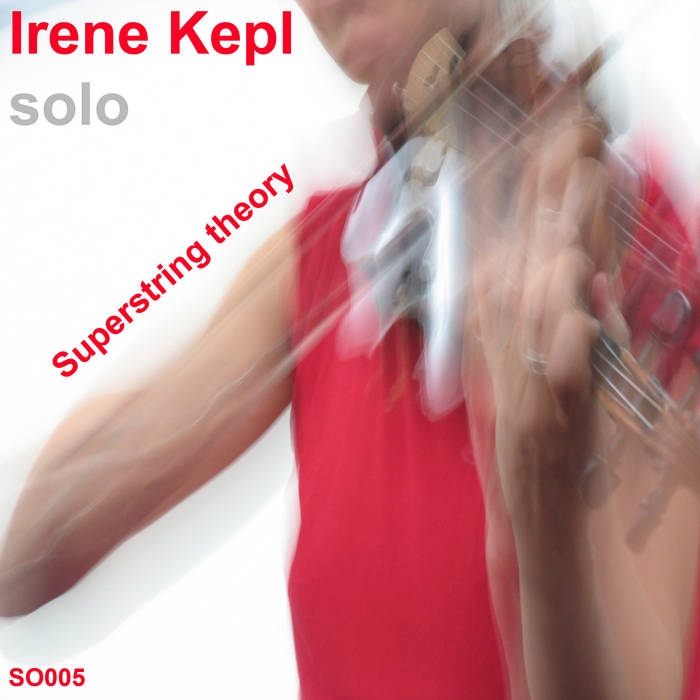 Superstring theory [Calabi-Yau] is a solo live recording from the SoundOut festival in Canberra 2017. Why the title: because the algerbraic geometry of Calabi-Yau related to Superstring theory conjures up multi-dimensional lines and folds in space, and way of perceptions, that suits Irene's musical free improvisations/spontaneous compositions. Irene's solo is multilayered and “multidimensional” and one feels like you are following any of the various lines of thought that disappear in one dimension and appear in another, somewhere completely unexpected in a whorl of brilliant creativity.

Violinist and composer Irene Kepl studied classical violin and jazz in Linz and now lives in Vienna. Her work focuses primarily on contemporary classical music, free improvisation, composition, Jazz and groove based musics. She has performed at many festivals and venues including: Klangspuren Schwaz, Festival 4020, Festival Unlimited, 12 points Festival/SE, Donau Festival Ulm, DanceKiosk Hamburg/GER, Java Jazz Festival, Jazzfest Vienna, Jazz Festival Petrovac/ME. Her music has been broadcast on various radio stations in Austria and abroad. She has received the fellowship "music OMI“ New York, Gustav Mahler Composition Prize, the national scholarship for young musicians, the talent development award for composition from Upper Austria and the Theodor Körner Prize for composition. Commissioned works for Brucknerfest Linz, ORF Musikprotokoll and Wiener Festwochen. She has worked with Joëlle Leàndre/FR, Malcolm Goldstein and George Cremaschi/USA, Korhan Ehel/TR, Petr Vrba/CZ and Moe Staiano/USA amongst others. She is also the founder of the monthly held concert series "Musik in Raum" in Upper Austria, which will feature many different projects. Further work includes commissions for theatre, film and sound installations.
She can be contact via here web site below:
www.irenekepl.at

Recorded by Kimmo Venonnen at the SoundOut Festival 2017
Edited and Produced by Richard Johnson
Image by Vicki Shukuroglou from SoundOut 2017
This is the fifth SoundOut release:
SoundOut SO005